Mark is not with us anymore.. His heart stopped beating on the way to a neurosurgeon consult at 1:47pm local time. Mark crossed the rainbow bridge not knowing love and kindness and we didn’t have enough time to show him that it exists. His abused body gave up. People had failed you, little one. Forgive us… In the end, he was not alone and passed in the arms of a volunteer.

No more pain for you.. Run free!

His life story is torture and abuse. That is all Mark had seen since he was born 11 years ago.

Mark’s owner didn’t give much thought about his being because this poor soul belonged to a very sick, sadistic person, an evil in a skirt. Not only was he kept on a short chain tied up to a radiator for 11 years (!), but also tolerated daily beatings and torture, initially “just because” and later because he started crying of pain and hunger. He often had days with no food, and sometimes no water. And pain. Lots of pain. The owner also shaved him frequently so he does not shed a lot

When our partners rescued him, he was laying non-responsive in sandbox at the kid’s playground. His paws were tied up, a bag was placed over his head, and he was beaten unconscious. They finished by stuffing his mouth with dirt. Neighbors said it was done by a 8 year old child. They did stop the beating but that’s all. Indifference is just as scary as an act of violence itself. Yes, they stopped the beating but left the dog without help.

Mark barely survived and is in a very rough shape. He sustained head trauma and is in a lot of pain. The spine also give him troubles. He has hard time using his hinge legs.

It is not first time the owner throws out her dog. When it happened last time he miraculously survived the torturing by dog hunters. Mark never visited the doctor and now needs a thorough medical evaluation, starting with pain management, heart echo and an MRI. He needs to be admitted to a hospital and our partners do not have the funds for it. If you could help, even a little, that would make a huge difference to this poor old guy. After all he has been through, Mark deserves to have more time, free of pain and suffering…

Please do not pass by his troubles. His remaining years must be different. We must show him that life without pain is possible. With your help, we can change it and turn this magnificent animal into an animal he meant to be by Mother Nature. 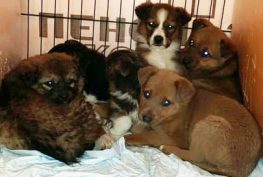