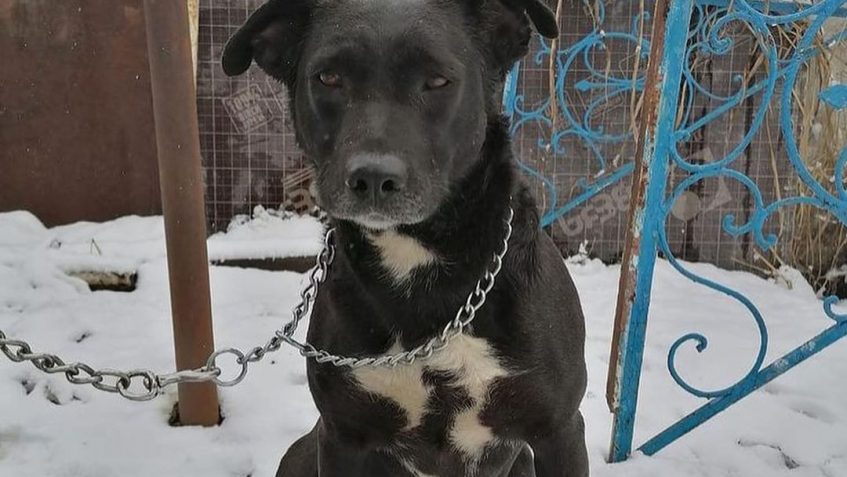 We were able to visit the clinic earlier to do the Xrays. There are 2 more pneumatic bullets in Jessie’s body. Looks like our girl was a practice target for 2-legged monsters! Unfortunately we were unable to do xray of her belly – it would take 2 people to hold the dog and one of the volunteers that brought Jess today is 7 month pregnant, so we have to come back for more images and discuss the course of action with a doctor.

Jessie is sending much love to her wonderful supporters! Besides being safe and fed, there is slight improvment in her ears! Unfortunately, the hearing in left ear is lost forever. For too long Jessie was living with an infection and damage is irreversible.  It will take months for infection to resolve and we hope that will be the case and surgery will not be necessary.  At the moment Jessie lives at a medical boarding. We can’t say the quality of her life is great due to severe infection but she is in comfortable enviroment and is allowed outside to socialize with other residents.

On Tuesday, Jess is scheduled for an xray to see if there are more bullets anywhere in her body.

Jessie’s preliminary diagnosis is a chronicle verucous otitis. Tissue hyperplasia and profused ceruminous secretions is observed. The pneumatic bullet found near her ear had to be removed right away and Jessie undervent a mini surgery under a local anesthetic. Now Jessie needs an Xray as doctor suspects it is not the only bullet. More thorrow check up revealed old scars from head injuries. In a meantime Jessie was discharged into medical boarding where she will be given her drops and medications to combat an ear infection. We still need your help! Please do not leave Jess just yet!

Poor Jessie did not ask to be thrown on the streets of Chechnya (former USSR republic), or to have the life she now has. After being dumped while pregnant Jessie, a house pet, had to learn how to survive brutal winters, burning summer heat and how to avoid humans she never saw kindness from. She was always hungry, never safe, fighting for scraps, having multiple litters of puppies, and losing them all to poison or bullets (common methods of dog population control).

After her last 3 babies were shot to death, she refused to leave them, and was stabbed. A kind woman who sometimes fed her, found Jessie bleeding, and unable to walk. She brought her to the clinic, where they cleaned the wound but were unable to do anything else for her. Her ear infection was left untreated for God knows how many months bringing her great discomfort and pain. She was getting weaker and weaker every day, constantly shaking her head and scratching ears, so when our volunteer saw a post, she immediately arranged a transport to Moscow. We have learned that Jessie was spotted first time back in 2019, was placed on boarding several times but every time was thrown back on the streets with no fault of her own.

Jessy has multiple infections, her ears are completely blocked with it and oosing black substance. She needs urgent treatment to save her ears and hearing, vaccination and spay. When we brought her to a vet, pneumatic bullets were found in her ears! She also had many old knife wounds.. She is at the clinic undergoing tests before a surgery.

It is impossible to imagine how horrifying her life on the streets was and how humans have treated her.. Jessy is still young and does not deserve to live in pain or ever be on the street again by herself…

Please help us get the necessary funding to cover the surgery. If you can help Jessy in any way she has all the chances to finally live pain free. Any and all donations are very much appreciated! 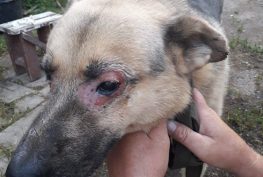